Now in its 13th year, the San Diego Art Prize is presented by the San Diego Visual Arts Network and dedicated to the idea that the visual arts are a necessary and rewarding ingredient of any world-class city and a building block of the lifestyle of its residents. Conceived to promote and encourage dialogue, reflection and social interaction about San Diego’s artistic and cultural life, this annual award honors artistic expression.

The San Diego Art Prize is a cash prize with exhibition opportunities, spotlighting established San Diego artists and emerging artists each season whose outstanding achievements in the field of Visual Arts merit the recognition. Each pair of artists, one established, one emerging, work together to create an exhibition that highlights each artist’s talents, while finding the merging point for collaboration. 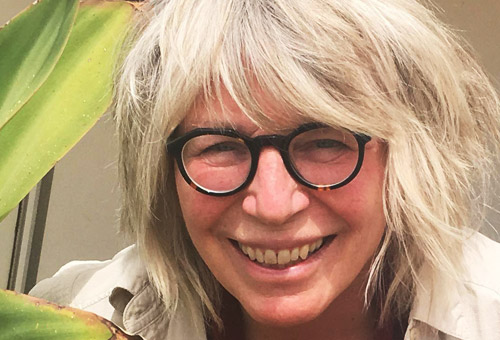 Anne Mudge creates ethereal environments of complicated wire works that looked amazingly fragile but turned out to be as resilient as its creator. Tension wire and physics keep these very organic works afloat. Mudge says there are challenges and, “…magic moments of discovery.” 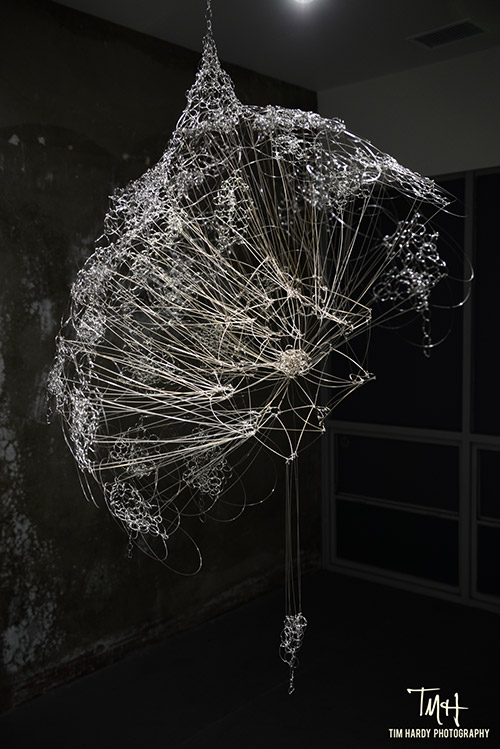 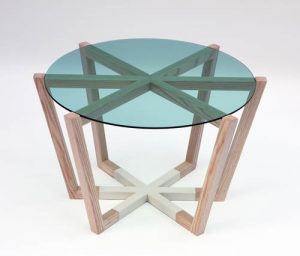 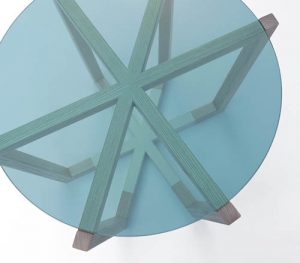 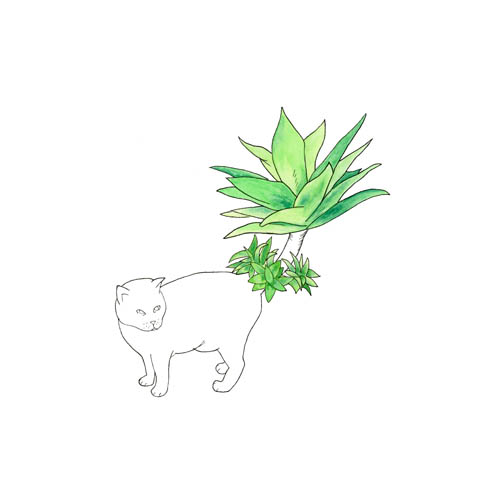 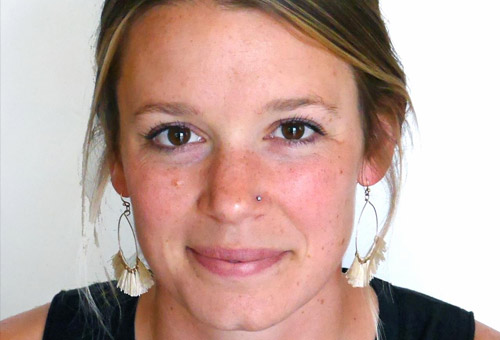 Erin Dace Behling shares geometry and repetition of form as elements in her furniture design. Both women in this partnership are creating landscapes because they are arranging biological components into a sort of scenery, but Behling is using a wider variety of materials and her works are functional. She uses very familiar components—but in unfamiliar ways. 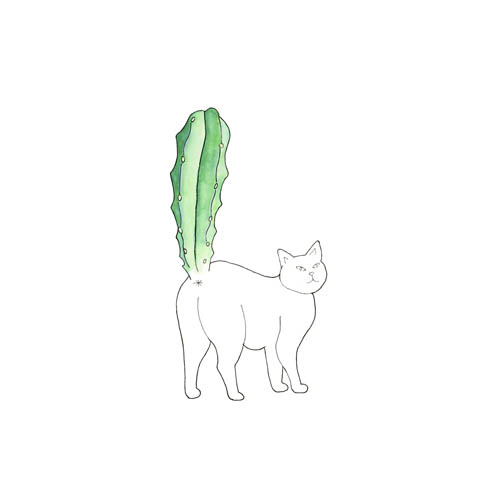 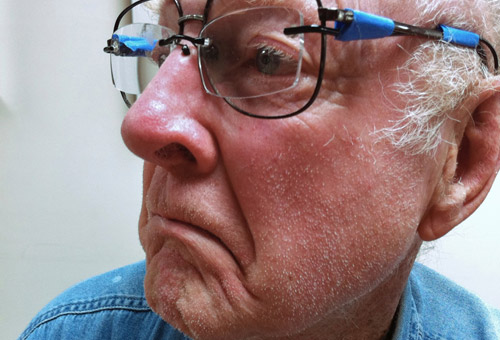 Robert Matheny has played with every medium and combines strong conceptual art ideas with a tangible product which is almost never functional. He is a master trickster with a sense of humor of the cynical variety and the constant surprise of never knowing what he will do next. 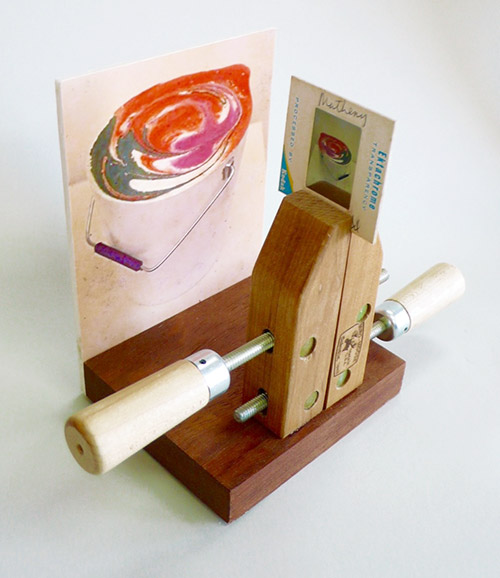 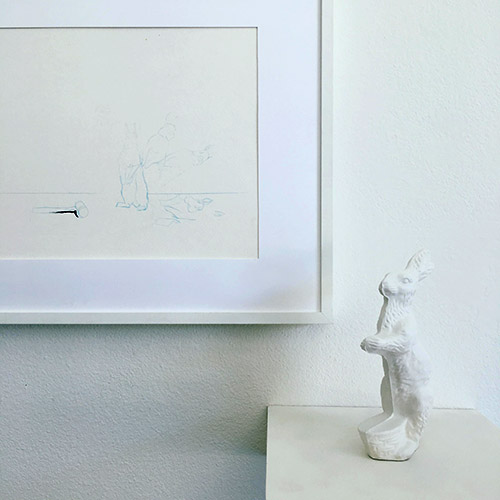 His choice of Max Robert Daily makes so much sense once you know that San Diego based Daily works in visual art and performance, incorporating media ranging from drawing and sculpting, to puppetry and mime. Previously, a student of set design and a resident puppeteer, Daily knows his way around creating with intention. 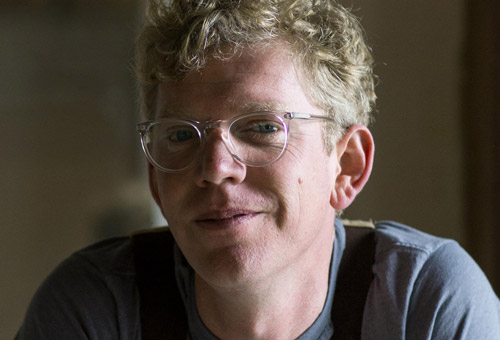 The San Diego Art Prize is a cash prize that spotlights established San Diego artists and emerging artists whom they choose to exhibit with and mentor. It’s awarded each season to artists whose outstanding achievements in the field of visual arts merit the recognition.

Now in its 11th year, the San Diego Art Prize, presented by the San Diego Visual Arts Network, awards a cash prize and exhibition opportunities to established and emerging San Diego visual artists. The winners of the 2017 prize are Rizzhel Javier and Alexander Kohnke. In addition to the two winners, four artists who were nominated for the San Diego Art Prize will be featured as the 2017 New Contemporaries at Art San Diego. They include Michelle Montjoy, Cathy Breslaw, Miriam Gabriela Garcia Aguirre, and Rebecca Webb. The exhibition is curated by Patric Stillman, director of the Studio Door in San Diego.

Artist and educator Rizzhel Javier uses photography in many forms. Formally trained in darkroom black-and-white photography, Javier uses photography as a tool to explore memory, human interaction, and relationships. Her recent projects include “Unmentionables,” which features a collection of images and letters from people who don’t talk to each other anymore, and “Move(ment),” a study on memory through image and motion.

Javier is an advocate for arts education. She founded BRIDGE, a vehicle for emerging artists and art educators to learn through a variety of workshops, seminars, and events; works with displaced children and incarcerated youth through the AjA Project; and teaches a documentary short film class through Pacific Arts Movement. 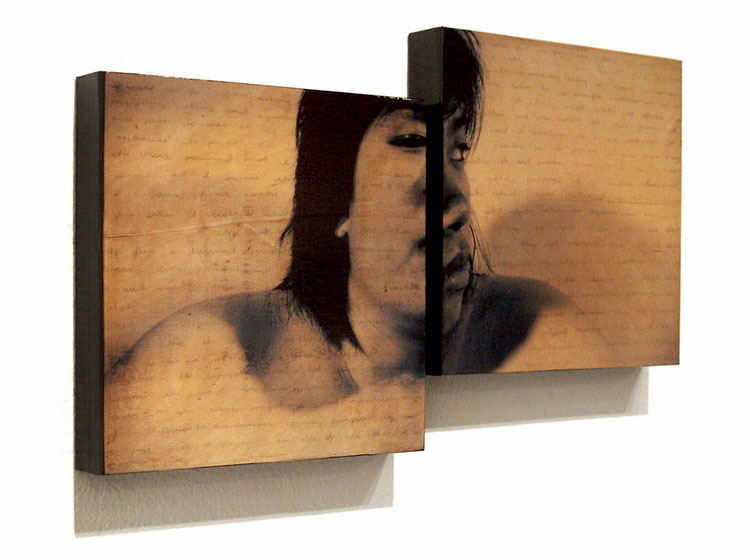 From The Exposition Collection

Alexander Kohnke is an artist and graphic designer who uses a wide range of media, including drawing, photography, printmaking, and video. Known for work that has a sense of humor, Kohnke creates art that is both personal and universal. His recent work includes Tooth and Nail, roll print on paper and oil on acrylic, and Space Invaders, wax covered c-print and paper.

Born in Germany, Kohnke lived in Belgium and Switzerland before moving to Los Angeles in 1994 and San Diego in 2014. His works are held in private collections in La Jolla, California; Tucson, Arizona; Los Angeles, and Cologne, Germany. 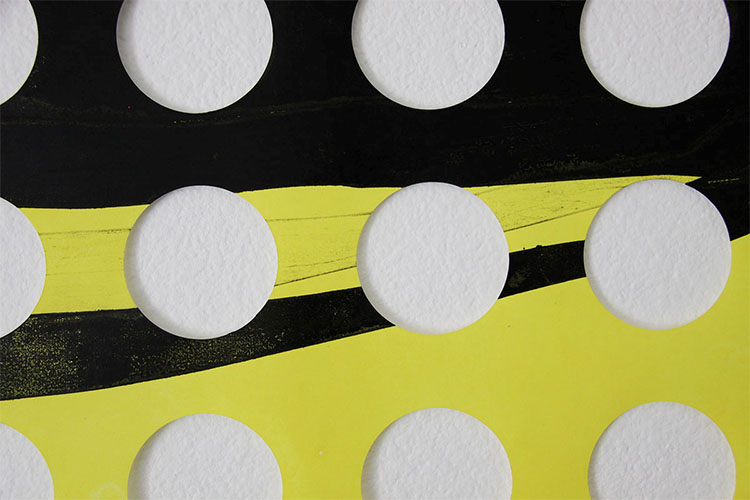 Shinpei Takeda is a Japanese artist based in the Tijuana/San Diego area and Düsseldorf, Germany. He uses a wide range of mediums exploring the memory of human violence, particularly via the narratives of those in exile. He has created large installations in different sites across the world based on his 8 years of investigations, interviewing over 60 atomic bomb survivors living in the North and South Americas.

Takeda is also a founder and the creative director of the AJA Project, a nonprofit started in 2001 that’s dedicated to working with resettled refugee children in San Diego using participatory photography. The executive director of the AJA Project, Melinda Chiment, writes of Takeda that he is “an internationally acclaimed artist who creates, invites, and then brings us into a new space through his work. This is a space where the injuries of injustice wreaked upon others are felt by each of us; a space where others’ hunger for freedom is our hunger; a space where we can begin to experience ‘humanity’ as ‘all of humanity’. And before we leave this space, to return to our separateness, he challenges us to act.”

Recognition of Excellence in the Visual Arts

William Feeney’s art is about questions. The place where things are exposed, negotiated, and solved. He occupies those taken-for-granted aspects of the narrative, and presents objects that speak to questions he has fixated on. The result is that his artwork occupies a space that exists between things.

As writer Jim Ruland notes, “While there is beauty in the order, arrangement, and attention to detail in [Feeney’s] sculptures and projects, the work is not designed to present something that is pleasing to the eye. Feeney’s aesthetic is to provoke, not please … It is a singular vision that marries high-concept premises with intricately crafted sculptures that are as thought provoking as they are arresting. They belong to the type of art that lodges in the viewer’s mind. It is work that inspires ideas, and that is the most dangerous kind of art of all.”

Feeney received a BFA from UMass, Amherst, and an MFA from UC Santa Barbara. He was awarded a California Arts Council Grant in 2003, a StartUP Award from the Museum of Contemporary Art San Diego in 2007, and a residency at Djerassi in Woodside, CA, in 2014.

Special videos by Melissa Au with Interview by Jon Au.

The San Diego Visual Arts Network (SDVAN) is a database of information produced to improve the clarity, accuracy, and sophistication of discourse about San Diego’s artistic and cultural life. SDVAN is dedicated to reinforcing the idea that the visual arts are a necessary and vital part of the health of our city. The San Diego Art Prize has been the goal of SDVAN since its founding by a committee of major art leaders in the San Diego region. With over 800 art resources on its site, SDVAN has become one of the main sources for disseminating information, encouraging collaboration, and aiding in cross pollination between all the arts. With its expanding infrastructure of spokespersons, SDVAN is able to promote the vision of the future role that the visual arts will play in the San Diego community as lively, thriving, positive, and empowered.

The Athenaeum Music & Arts Library has earned a reputation as one of the outstanding art collections in San Diego. One of only 16 nonprofit membership libraries in the U.S., the Athenaeum is a rare cultural institution that not only offers extraordinary depth in its music and art archives, but also presents a year-round schedule of concerts, lectures, art exhibitions, studio art classes, and more.