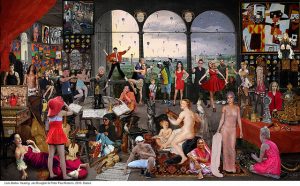 Artist Bio:
Born in Barcelona, he studied at the Llotja School and the Center for Visual Arts Massana School of Barcelona.

In 2007, Barba participated in ‘The Garden of Earthly Delights’, from the series Travellers in Time, based on the novel by Bosch at Art Basel Miami, cited in various media (CNN New York, The London Times, The Independent …) and makes a music video collaboration for ‘Steady Mobbin’ Lil Wayne.

Since 2009, he has been part of the Young Masters, working in various exhibitions in London. In 2010, Barba received the Young Masters Art Prize with the triptych ‘The Hay Wain’, exhibited at The Courtauld Institute of Art presents the installation with fiber optic ‘The Last Supper’ at The Old Truman Brewery in London.

In 2011, Self-portraits takes the historical memory of classic and contemporary artists and initiates a new dialogue with the viewer, not without irony, which deals with social issues. The most representative works in the series are ‘Warhol’, ‘Frida Kahlo’, ‘Miro’, ‘Brueghel’, Jan van Eyck.

In November 2012, ‘The Painter’s Studio’ was auctioned in The British Friends of the Art Museums of Israel organized by Sotheby’s in London.

My work is a reflection of society and a critique of the problems it generates. ‘Art is a privileged platform and those who we have access we have to tap…’ I single out the two speeds at which society progresses, the vertiginous imbalance in our world, opulence and poverty, culture and ignorance… and on the other hand I show the isolation, mass consumption, alienation and the daily loss of identity. I try to translate these concepts conceptually and formally.

The formal part of the fascination stems from the way our brain receives external afferents, since the image we receive through the retina becomes totally fragmented at the hypothalamus, where a virtual image is reconstructed conditioned by the evolutionary parameters from our species. Which leads me to contextualize elements of reality to place them in another, creating new realities.

The items I use are the result of the photographs captured with my camera, videos and other documentation. These are characters and icons turned into symbols to convey my message in an ironic way. These elements coexist in the works of art of the past, which I use as a support. My language emerges from this combination.
Formally, I use black and white to represent the past and the colour to show our present.

I usually create a relationship between characters of the cultural world, artists, curators, filmmakers, thinkers, religious, political, poor, marginalized, displaced, in contrast to those generated by the star system, as well as works of art, sculptures… I create stereotypes ranging from military uniforms with floral patterns wielding ice cream, instead of guns, in order to demystify the image associated with aggressiveness.
I incorporate tattos of barcode, wich symbolizes the loss of individual identity, approval, alignment and mass consumption.

Recovery of past masters, contemporary artists from different disciplines as Jeff Koons, Paul McCarthy, Warhol, Lichtenstein, Donald Judd, Sol-LeWitt, Cattelan, Miró, Matthew-Barney, Richter, Rothko, Vanessa-Beecorft… and also works by artists of the past that are no longer in ‘the art guidebook’ and are almost forgotten, for me it is a contrast antagonistic.
While the classics seek perfection from perfection, contemporaries seek perfection from imperfection. The classics define the work as artistic craftsmanship, and the contemporary mechanization and seriation socializes an important part of art.

The fact I criticize society dramas through plasticity and a nice way is not accidental ‘The more people see atrocities, more likely to raise awareness and stop the same’. The formal part and the complex conceptual part create contrasting microhabitats where past and present lose their effectiveness and become virtual time.

I have a relationship of admiration with art history and I respect the old masters. I think it’s important to keep the roots and our historical memory. The contemporary art today has his foundations in the past masters, for example: Rembrandt and Caravaggio, chiaroscuro was so useful in photography and film. Leonardo structured the foundation of humanism and multidisciplinary art. Duchamp was a precursor, decoupling context of everyday objects and turning them into conceptual and artistic objects: Ready made. Mondrian worked with the structuring of a work, from the formal point of view with his theory of mass volume and colour.