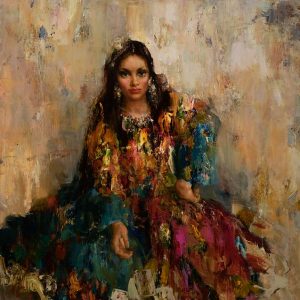 Artist Bio:
Nikolai Blokhin – Born in 1968 St. Petersburg, Russia. Nikolai Blokhin has been painting since the age of eight. This young genius has a unique talent combining traditional and contemporary styles and expressing his talent in figurative works as well as still life and landscapes. His ability has not gone unnoticed including the Grand Prize at the American Society of Portrait Artists 2002 competition at New York’s Metropolitan Museum of Art and Grand Prize from the Portrait Society of America, Boston, in 2004.

Additional Info:
Born in 1968 in Saint Petersburg, Russia, this young master has emerged as one of the most important artists of his time. Trained first at the district art school before entering the Repin Institute, Blokhin attained a solid academic foundation in art which can be traced, admired and interpreted today in some of Russia’s famous masters from the turn of the 20th century.

While cultivating ideals realised by many of his predecessors in Russian art theory, Blokhins’ search towards a traditional expressive language consumed him in his early academic years. It was not until he entered the Academy of Arts that he began to search the canons of those who broke with tradition and shook up thematic artistic views, that he found his own distinct style.

Today, Nikolai Blokhin is a Professor of Art, with emphasis in drawing, at the Academy of Arts in his hometown of Saint Petersburg.