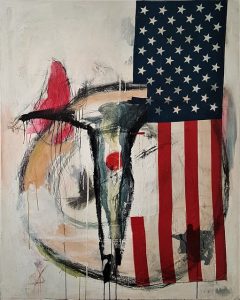 Artist Bio:
Margot Waller Madgett is a visual artist working with an experimental approach, blending materials and methods to create contemporary, abstract, modular arrangements, and mixed media paintings and sculpture to inspire mood, contemplation, and connection with oneself and the world around us.

Margot was born and raised on the Island Guam where her father, a California born entrepreneur and her Guamanian mother opened Guam’s first hotel in the early 1950s. The second youngest of nine brothers and sisters, Margot found it difficult to stand out and was painfully shy. So much so that her parents enrolled her into a special summer program hoping that it would help her break out of her shell. There, in a classroom filled with art supplies, Margot first found her voice in painting. It sparked her imagination, and the freedom she felt to create anything she wanted, still finds its way into her art today. Margot’s family moved to San Diego in the early 1970s, and Margot continued to study painting throughout her formative years into high school and college, where she was advised by one of her professors that the only true way to learn how to paint is by painting. Margot took those words to heart and rented her first studio in downtown San Diego, where she continued to pursue an intensive regimen of self-study. She began to show her work in the early San Diego Art Walks, and was soon being featured in group shows and galleries throughout San Diego and Los Angeles. Her first works were direct paintings of female forms in oil and acrylics, in a style that was modern, playful, and colorful.

Margot’s passion for creating drives her to work on several series at a time. She uses a variety of techniques and materials (acrylic paint, oil stick, solvent transfers, pencil, charcoal and ink) and imagery in mixed media on wood, panel and canvas. Her work has a powerful sense of presence. She integrates color, mood, form and composition, creating a unity, which is both understated and deeply moving. You will find elements of movement, texture and layering with combined mediums to weave threads of connecting imagery taken from nature, abstract elements, and humanity throughout her work – subtle underlying stories hiding in plain sight, purposely open to interpretation. Margot integrates and repurposes discarded and found materials bringing them new life in her work. She was commissioned to incorporate the debris from a WWII veterans’ airplane wreckage her client dug up from his Fathers crash site into a painting. She turned those broken fragments into a grouping of paintings and sculptures that told his father’s story in a way that he could never have imagined.

Margot has also developed a distinctive style of contemporary children’s portraiture, incorporating individualized motifs, photography and painting that are so personal and so powerful, they often bring her clients to tears. She has a unique ability to capture the essence of each child’s spirit and turn them into the central character in a significant contemporary painting.

Margot has exhibited extensively throughout southern California and is in corporate and private collections. Art critic, Robert Pincus writes, “The CCG series is ethereal and absorbing, which evokes a series of prominent sources they include CY Twombly and Brice Marden”.

Artist Statement:
My work is like a story in the making, while I’m working on a piece it’s like being in a storm, spontaneous using my wits, composed and chaotic, control and out of control. Like in a story while you’re experiencing whatever it is you can’t tell what happened until afterwards to yourself or to others.

Working from source materials and mixed techniques discovering and executing in the moment using imagery, color and abstraction together they become something unfolding and telling. My interpretation and reoccurring use of images from nature such as birds, lotus flowers are symbols and visual cues into the work. I use perspective grids and boxes as a way of telling the viewer about the possibilities and differences of our own perspectives of life. I feel my work is a subconscious interpretation of humanity’s desire for peace and spiritual satisfaction. Our search for the positives of self-knowledge, awareness and connection with nature and each other through our own personal journeys and stories. My hope is for a connection between the viewers’ interpretation and the work as a visual thought-provoking story line.