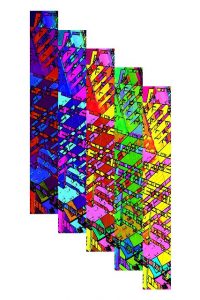 Artist Bio:
Wally Gilbert had a long international career as a scientist, working in Molecular Biology on genes and DNA. He was awarded a Nobel Prize in Chemistry, in 1980, for solving the mystery of DNA sequencing. Fred Sanger in England and Gilbert in the United States shared that prize for finding ways to decipher the order of chemical groups along the DNA molecule and hence to make it possible for the first time to read the genes. Those discoveries drove the development of Biology as a gene-based science across the last four decades and led to the working out of the Human Genome program and the current understanding of all organisms.

For the last fifteen years Gilbert has been working in Digital Art. He began by making large images of fragments of the world, focusing on form, texture, and color, using a small digital camera. Very often these pictures were drawn from machines or from architecture. Jan Kubasiewicz, a professor at the Massachusetts College of Art, saw his work and organized his first one-person exhibition in 2004. He was invited to Poland, by Kubasiewicz and Jozef Zuk Piwkowski, to create an installation at the Norblin Site in Warsaw, an old decaying factory. This installation, consisting of twenty-six 12’ by 8’ hangings and thirty 36” x 24” prints face-mounted on Plexiglas, was installed at Norblin in Warsaw for two months in 2007 and then later that year in Łodz and again in Poznan in 2009. The set of thirty face-mounted prints were also exhibited in New York, Washington D.C., Los Angeles, and San Diego.

Gilbert was invited to participate in creating a book on the Boston Ballet Company. He spent several years photographing ballet dancers in rehearsal. These pictures, which capture the joy and motion of the dancers, appeared in a book on that company “Behind the Scenes at Boston Ballet” by Christine Temin with 68 pictures by Wally Gilbert.

Gilbert then moved to abstractions, first based on silhouettes derived from photographs, then to ever more abstract images based on the human head, at first still interpretable, but then in patterns having only a slight, residual aspect of a biological curve. Then he created digital images, made by hand on the computer, based on geometrical forms. This work involved patterns of superimposed shrinking squares and triangles, strongly colored or in black and white, and led finally to images involving single lines. More recently he has been exploring abstractions created by superimposing several photographic images.

Artist Statement:
I began making digital images as art when I discovered that I could make large prints from images taken with a small digital camera and that these prints carried an emotional and aesthetic impact. My earliest work was of fragments of the visual world, either portions of natural scenes or of man’s architectural or industrial artifacts. My first one-person show included a 48” x 72” image made from a two mega-pixel camera.

I was invited to Poland, to do an installation at the Norblin Site in Warsaw, by Jan Kubasiewicz and Josef Piwkowski. These photographs of decaying machinery were installed in Warsaw in the Summer of 2007 as twenty-six 12’ x 8’ hangings and thirty 36” x 24” prints, face-mounted on plexiglas. This show was exhibited again in Lodz and in Poznan.

After photographing dancers in the ballet, I went on to explore abstractions, first in a “Vanishing” series, that was based on a natural form, the outline of a human head. The many patterns produced in that series all shared some aspect of a biological or natural curve, which still was manifest even in the smallest cropping of those images.

In my later work the basic element was a straight, shaded line, which I used to create geometric patterns. The “Geometric Series” explored patterns in color or black-and-white created from overlapping squares or triangles or just from lines, taken either simply or in intersecting groups.

I make many images by hand on the computer. The computer simply holds the intermediate forms as I superpose the many layers I create to build up the image. The images begin in black and white, and then I color them in the computer. I generate these colors either by accessing the colors available or, in a more complicated fashion, by using the ability to change the global input-output functions for each color and intensity separately. When the layers containing the colored images interact with each other, still more color patterns appear. The computer is a digital workspace, driven by my hand and eye.

My most recent work involves photographs moved to extreme values in color space yielding strange color contrasts further superimposed on each other. These images exemplify my delight in light and form, and my search for a three-dimensional effect on a two-dimensional surface. I search for depth beyond the picture plane and for mystery.