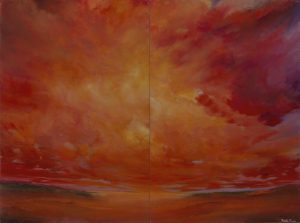 Artist Bio:
Contemplation of emotion and imagination unite in the magnificence and aesthetic superiority of clouds. A canvas which human moods, from dark and moody, romantic, sensual, to carefree are reflected. Clouds in the foreground to those disappearing over the horizon, serve as a reminder of the past, present and the future and show quickly how the sky can change. A habit that we share with the sky itself.
The fiery sun and flaming red skies, contrasted to romantic soft pink skies bedding themselves on the horizon. The scorched earth begging for rain and the chameleon clinging with hope to a vivid green tree in the middle of a drought. The midnight blue sky, alive with flickering stars and fireflies dancing to the beat, of an opera of cicadas.

My love for clouds blossomed, and as a child I believed they represented magic. They would come and go, seemingly as they pleased, occasionally they would be angry and the skies would break open with flooding rain. Nowadays, clouds to me represent the interconnectedness of nature. The beginning of life. Every time I look at a piece of paper I think of a cloud. The colours of the sky resemble the moods of people and their colourful characteristics, whether it be romantic, imaginary, or dramatic overtones. Each flower is unique and a flower represents a person, travelling through this vast world with hopes and dreams, reaching for the sky, whilst not forgetting the beauty of their surroundings.

My paintings are in traditional oils and my technique is non conformist. I commenced painting in 1997. Since that time I have painted an extensive body of work being inspired by the Fauve Artists. For two years I studied drawing and anatomy. I had my first exhibition in 2002 at Tim Goodman Art and Auctioneers (later Bonham & Goodman) in Sydney. Large canvasses being my forte.
Since 2002, I have had numerous successful solo exhibitions in Sydney Australia. And since 2015, after winning “emergent Artist award” in Monaco, I have exhibited in Zurich, Rome, Venice, Vienna, China, and USA. A majority of my work is commissioned or sold privately.
2019, includes a group exhibition at Shibuya Station, Tokyo. New York Art Expo, and a solo exhibition in Sydney.